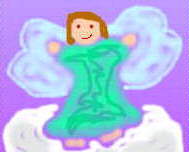 Our 13 year old daughter, Catherine, wrote and read it to her class at St. Mark’s School so they could understand Lissencephaly. We couldn’t be anymore proud!

Do you believe in angels?  Well, maybe you should read this story, even if you do believe.  There is an angel that has changed my life for all time.

On May 3, 1992, I woke up to use the throne.  It was 6:30 AM.  I went back to bed but couldn’t sleep.  I went downstairs.  To my surprise, Aunt Gabby was sleeping on the couch.  I sauntered into the kitchen to ask Mommy why Aunt Gabby was here when it hit me.

For the past nine months, my mom had been growing a belly.  About seven months ago she told me she was going to have a baby.  My aunt was to come down from New Jersey when my mom needed to go to St. Agnes Hospital.  My sister, Erica, had arrived.

For the first five months, Erica was a quiet baby.  She did not cry.  Then mommy started to notice other things about her.  Erica always threw up her food even hours after she would eat.  She also seemed to have “fits” where her legs and arms would pull in towards her body and shake and her eyes looked funny and she would clench her teeth shut.  We also noticed that Erica never looked at people.  Mommy started to say that something was wrong with Erica.  Erica was not acting as a normal baby should.  When Erica was five months old Mommy told the doctors to find out what was wrong with her.  The doctors decided to put Erica in the hospital and do tests on her.  When the doctors did an x-ray of her brain they found out that Erica had Lissencephaly and Polymicrogyria.

Lissencephaly is when the brain is smooth like an upside-down bowl.  Either the whole or part of the brain can be affected.  Polymicrogyria is when the indentations and crevices in the brain are so small and compact that it is like there are none there.  When Mommy came home to tell us about Erica and what was wrong it shocked me because I was disinterested in the disabled.  I knew my life would never be the same.  Erica was always going to be like a baby.  She would need everything done for her for the rest of her life.

It was difficult to adjust to this new life.  I did not have a sister that would grow up and play with me.  I would always have a “baby” sister.  Our life seemed to change.  Sometimes it would be a slow change, like adjusting to packing a lot of supplies to help take care of Erica when we went anywhere.  Sometimes the change would be quick, like coming home from school and seeing a wheelchair sitting in the kitchen

At 5 ½ months old Erica started a school-like program called Infants and Toddlers Program.  This is a program that helps children who have some type of disability.  At age 3 she started preschool, half-day in a special school.  At 5 yr. old she started kindergarten, full day at the same school.

When Erica was two she had to go back to the hospital because she was losing weight too quickly.  She lost 12 pounds in one week.  Erica was not keeping any food down.  The doctors decided to put a tube in her tummy to feed her and do an operation called a Nissan flundapicaton.  This is when the doctors raise the stomach up into the esophagus.  Then they tighten the stomach muscles up around the opening so that food can not go back out.  We got a new machine in our house.  This was a Kangaroo Pump.  This pump feeds Erica through her tummy tube during the night when she sleeps.

At age three, about four weeks, before Christmas, Erica caused mommy’s “cookie crisis”.  Jared and I came home from school to find out that Erica was in the hospital.  Apparently, mommy had been making Christmas cookies and had a sudden feeling to check on Erica.  She had turned blue and was in a seizure.  When Erica goes into a seizure she locks her jaws and joints.  She will sometimes stop breathing during this time.  Erica has seizures a lot but this was the worst she has ever had.  Mommy rushed her to the hospital.

The doctors said that Erica’s lungs collapsed on her and had to be put on a machine to breathe for her.  She didn’t come home until two weeks later.  This was the first time I saw her since the “crisis”.

I don’t like to remember this because we almost lost my sister.  Mommy does not make Christmas cookies anymore.  We buy them from the store now.

When Erica was four years old we all started to notice that she startled herself when she was sleeping.  Erica also would stop breathing when she slept.  Mommy had to take her for more tests.  The doctors did three sleep studies on Erica.  For the tests, Mommy and Erica had to spend the night at a lab.  The doctors attached a bunch of wires to Erica’s head and body.  These wires were connected to a computer that recorded what happens when Erica slept.  We found out that Erica would stop breathing during the night for at least 267 times.  And 80 of those times she would stop breathing for over a minute.  The doctors said that Erica needed a new machine.  Now she sleeps with a bi-pap machine.  This machine blows air into her and releases the air at a set number of times every minute.  This helps to make sure that Erica does not stop breathing when she is sleeping.

We now will joke sometimes that Erica is slowly turning our house into our own personal medical center.  We are slowly getting all the machines.

During Erica’s life, she has earned the title of God’s little angel.  My family believes this is true.

Erica may not be with us for a long lifetime, but this angel has changed me in the short time she has been with our family.  She has changed my views about people with disabilities.  They are worth our appreciation and more.

All people, no matter what their differences are, can teach us things worthwhile to learn.  Erica has taught me that even if you can not speak, walk or learn things as we can, you can still feel love.

One thought on “Lissencephaly: A Personal Narrative”